Showtime for the Pioneer Series

The trade fair Swiss Handicap 2019 stood for a major milestone in our annual planning. Why? Because this was the first time we presented the PIONEER SERIES, Scewo Bro’s series model. A report about night shifts, nervous Scewo employees, proud faces and a successful trade fair participation. It was showtime for the PIONEER SERIES.

BRO at the fair

The Swiss Handicap trade fair was highlighted brightly in our calendars. We decided to present our series model to the public for the first time at this fair. Once again, the entire team worked very hard the prior week to achieve this goal.

The last components reached us three days prior to the fair. All departments worked night shifts, in order to finish the new model on time. The software engineers nervously walked back and forth because they had only a few hours to bring life to the assembled Bro. But there was another appointment which made us even more nervous. A journalist from a regional newspaper wanted to visit us on the same evening in order to report about the series model. Shortly after he had arrived, the brand-new Scewo Bro set off to the stairs for the first time – and every team member held his breath. He reliably climbed the first steps. The tension was immediately released and all eyes began to shine. The pride was written in the face of each team member.

There was nothing that could stop us now for a successful trade fair appearance on the following day! The booth of the Swiss Cerebral Foundation and the health logistics company Cosanum was an eye-catcher. In cooperation with the Brändi Foundation, they had created an outdoor park that invited adventurers to test several products and to relax. In the middle of the natural landscape: The Scewo Bro PIONEER SERIES. Those who liked to, were invited to take a ride with BRO and climb the stairs to the «Chalet».

What’s new about the series model

In case you were wondering what’s new while you were reading, here’s a brief overview: Many thanks for your visit!

Have you visited us and the natural scenery at the Swiss Handicap? Great that we got to know you! We had a lot of fun taking you on a test drive with our Scewo Bro and experiencing how much joy we can bring with him.

We would like to express our special thanks for the honest conversations and for sharing your personal story. It is not common to share personal information. All the more we appreciate your valuable inputs and tips, which we can integrate excellently into the further development of Scewo and Bro. We are already looking forward to seeing you again soon!

We would also like to thank the Cerebral Foundation and Cosanum for the invitation and the great cooperation! 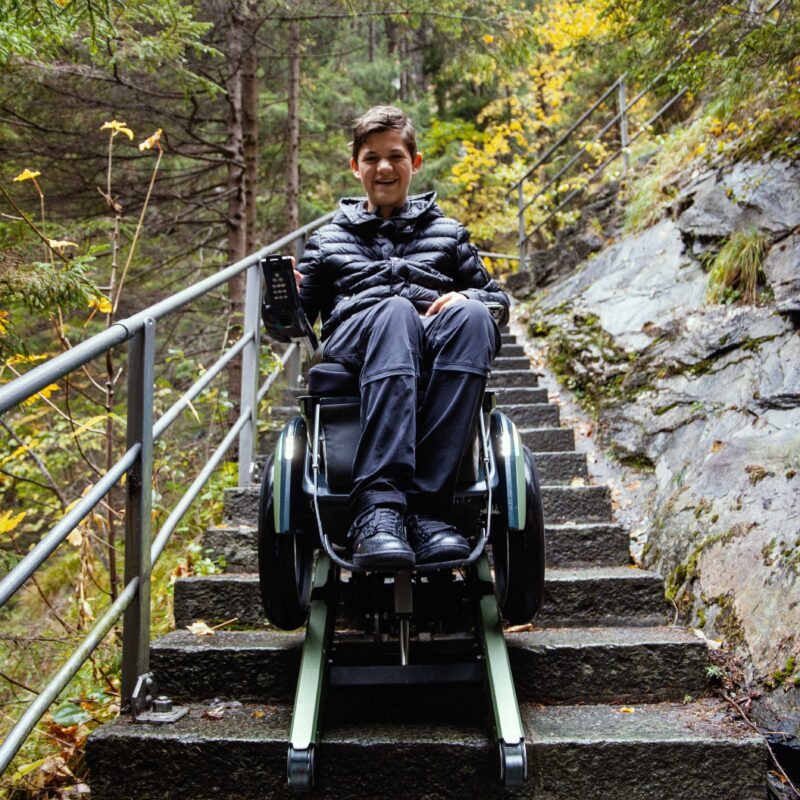